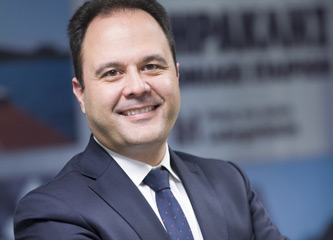 He joined HERACLES Group in 2003 and has since held senior executive positions. In 2010, he became C.E.O. of LAVA, a subsidiary of HERACLES Group, and managed to successfully develop new international markets, strategic partnerships and introduced new uses for industrial minerals. In 2012 he assumed the position of Concrete Operations Manager, and in 2013 he became CEO of Lafarge Beton. He assumed the duties of HERACLES Group Commercial Director in May 2016 achieving to boost Group sales and enhance its competitiveness. In June1st 2020 he was appointed President of the  Hellenic Cement Industry Association