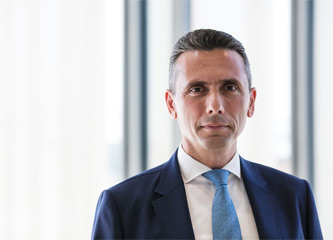 Born in Thessaloniki in 1970, Christos studied Physics at the Aristotle University while he continued his studies in the United Kingdom getting his Master’s degree in Economics (MA) and Business Administration (MBA) from Kent University. Christos has also completed executive education programs at Stanford and Duke Universities.

His started his career in 1997, as Marketing & Sales Trainee at Coca-Cola Hellenic.

In 2003, Christos became a member of Papastratos’ family, taking on responsibility of key positions in the company’s commercial department in Greece and abroad. From 2012 to 2015, he was based at the Philip Morris International Operations Center in Lausanne, Switzerland, holding senior management positions in the Sales Strategy department and then in the Commercialization of New Generation Products.

In August 2015, Christos was assigned to the position of Chairman and Managing Director of Papastratos and Head of the EU South East Cluster. In 2017, with a vision of a smoke-free future, he led a € 300 million investment that turned Papastratos’ facilities into one of the few production and export centers of PMI’s innovative tobacco products achieving to transform Greece’s leading tobacco industry to a world-leading technology company.

Christos is a BoD member in Organizations and Bodies such as the Hellenic American Chamber of Commerce, the Foundation for Economic and Industrial Research, the Competitiveness Council of Greece and the General Council of SEV-Hellenic Federation of Enterprises.

He loves sea and endurance racing.