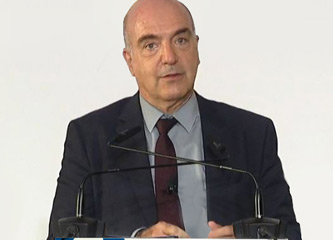 Mr. Sifnaios graduated from the school of Mathematics and Applied Sciences of the University of Athens having completed a special program on studies, methods and applications of Linear Programming and Network Flows. He went on to work as a research and faculty assistant at Columbia University, New York, U.S. where he received a Master of Science (MSc) in Operational Research and Applied Business Administration.

Mr. Sifnaios started his professional career at Mobil Oil Hellas in 1987 as a Strategic Planning analyst. He continued in a number of positions within Sales and Marketing reaching the post of Sales Manager for South & Western Greece.

He was the transferred to Mobil Oil International in London and Madrid where he assumed posts in supply and trading.

In 1997 he moved to BP International, based in Brussels to work on the European restructuring of the company.

He returned in Greece as General Commercial Sales Manager for BP Greece (2000 – 2002) to then once more resume his international career within BP’s European supply chain till 2007.

As of June 2007, he works in Copelouzos Group initially as New Projects Manager and currently as Group Energy Director in the sector of Gas. He also manages the Alexandroupolis LNG Terminal Project, under development by Gastrade.

Mr. Sifnaios was born in Athens in 1960 and originates from the island of Lesvos.

He speaks English, French and Spanish.