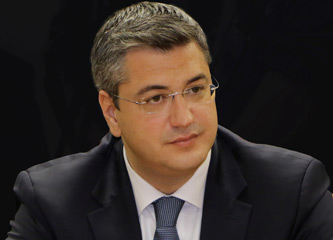 Apostolos Tzitzikostas was born on September 2, 1978. He studied Government and International Relations at Georgetown University, in Washington DC. After graduating in 2000, he had his first working experience at the Office of the President of the Committee on Foreign Affairs of the United States Congress. In 2002 he obtained a Masters Degree on European Public Policy and Economics from the University College of London. Following his studies, he created his own company on the field of production, processing and standardization of dairy products, based on organic standards.

He fluently speaks English and French and his articles are regularly being published in Greek and foreign newspapers and magazines.