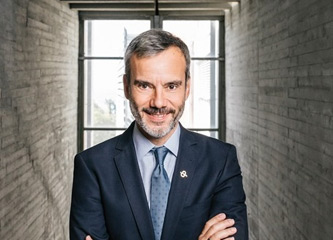 Konstantinos, the son of the civil engineer Mr. Vasilis Zervas and the philologist Mrs
Lilika Zerva-Orologa, is a graduate of the Experimental school of the University of
Thessaloniki and holds a Ba degree and postgraduate degree (Msc) with scholarship
and distinction grade from the Aristotle and Brown University (USA) respectively.
Since 1990 Konstantinos has started running his own office in Thessaloniki as a civil
engineer and has overseen as a technical consultant big projects like the construction
of the Finikas Football Sports Center. From 2010 to 2016 he was a member of the
Board of Directors of Attiko Metro sa. Between 2011 and 2014 he served as the
Chairman of the State Orchestra Board of Thessaloniki (SOB) and in 2013 he was
elected as a member of the Central Representation of the Technical Chamber of
Greece and the Regional Department of Central Macedonia.
His first foray into politics was in 2010 as an elected councilman in the City of
Thessaloniki, followed by his appointment as the Deputy Mayor for the Environment,
Quality of Life and Free Spaces (2011-2014). In 2013 Konstantinos was assigned as
the Permanent Deputy Mayor and in 2014 he took over as a Deputy Mayor for Citizen
Mobilization, Youth and Sports. In 2018 he officially announced his candidacy as a
Mayor for the local elections of 2019 and won 67% of the votes, a historic score for
municipal history of the city.
Konstantinos authored a book in 2019 entitled “Poplars or chamaerops? Thoughts for
Thessaloniki and politics”. The motto that has been the lodestar of his life and his
career is “ask not what your city can do for you, ask what you can do for your city”.